Here’s the episode, in case you can’t catch it tomorrow night.  Enjoy! 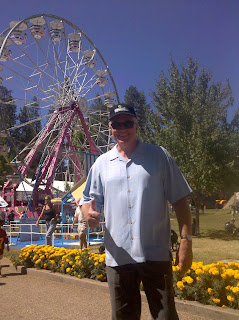 Segment to air on Thursday,
November 4 at 8 pm on KVIE Channel 6

Huell Howser’s segment on the Nevada County Fair will air on Thursday, November 4, at 8 pm on KVIE Channel 6. In addition to the November 4 airing, an encore broadcast will air at 3 pm on Saturday, November 6. The show is part of Howser’s new PBS series, California’s Golden Fairs, which will showcase the variety of interesting people and events held at California fairs, as well as focus on the rich history and relevance of all California fairs.

Howser, noted television personality and founder of the PBS program: California’s Gold, spent a day at the Nevada County Fair in August. During his visit, Howser spent time on the Fair’s Treat Street, sampling the various foods and interviewing individuals from the various non-profit organizations represented on Treat Street.

Howser’s new PBS series, California’s Golden Fairs, will be rolled out in the Spring of 2011. However, a “sneak preview” of six episodes, including the episode featuring the Nevada County Fair, are being released early on PBS stations throughout California. All shows aired in this sneak preview will be shown again as a part of the spring 2011 series. The entire series will air at a rate of one per week for 12 weeks. In addition to the 11 featured Fairs, Huell Howser Productions will produce a compilation episode focusing on the rich history of all California fairs.

There are 78 Fairs in California. Howser chose to feature the Nevada County Fair because of its strong community roots, its natural beauty, and its unique Treat Street.