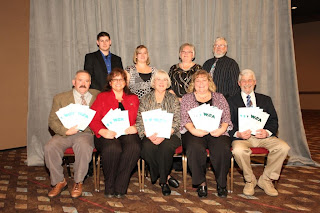 The Nevada County Fairgrounds received 25 awards at the 47th Annual Western Fairs Association’s (WFA) Achievement Awards held in Reno, Nevada, at the end of last month. The Nevada County Fairgrounds took home first-place honors for the Fair video created by Gold in the Foothills; its 2009 Draft Horse Classic event and several of its promotional pieces; and its “Ugliest Dang Cake” exhibit competition. It also received first place in the Fair featured program, Social Media Madness, for its work in social media.

The Western Fairs Association is a non-profit trade association serving the Fair industry throughout the Western United States and Canada.

To view the winning Fair video, visit www.GoldintheFoothills.com or www.NevadaCountyFair.com. With a theme of “Rooted in Tree-dition,” the 2010 Nevada County Fair is August 11 – 15.